South Australia’s premier sporting event the Tour Down Under followed hard on the heels of the Adelaide Hills bushfires. With salvage and recovery on everyone’s minds, the aftermath of the fires provided a poignant and dramatic backdrop to the week long race. From the Tour’s opening ceremony in Victoria Square featuring a free concert by power-pop twins the Veronicas, the cycling public was urged to attend the race stages taking place in the Hills to support local businesses and communities.

We visited the Hills on the Tour’s opening day, taking in some of the wineries who had lost stock, property or vines to the fires. At Barristers Block (below) the verdant canopy of one field of vines stood in stark contrast to the scorched, skeletal trunks and arms of its neighbour, a clear line indicating where the efforts of the volunteer fire fighters had prevailed.

At Petaluma (below) an outhouse lay in a pile of rubble, everything consumed by the intensity of the conflagration. At Art Wines the usual panorama of Tuscan greens and azure was stained with greys and black, the trees bare, an artificial winter in the midst of high summer. 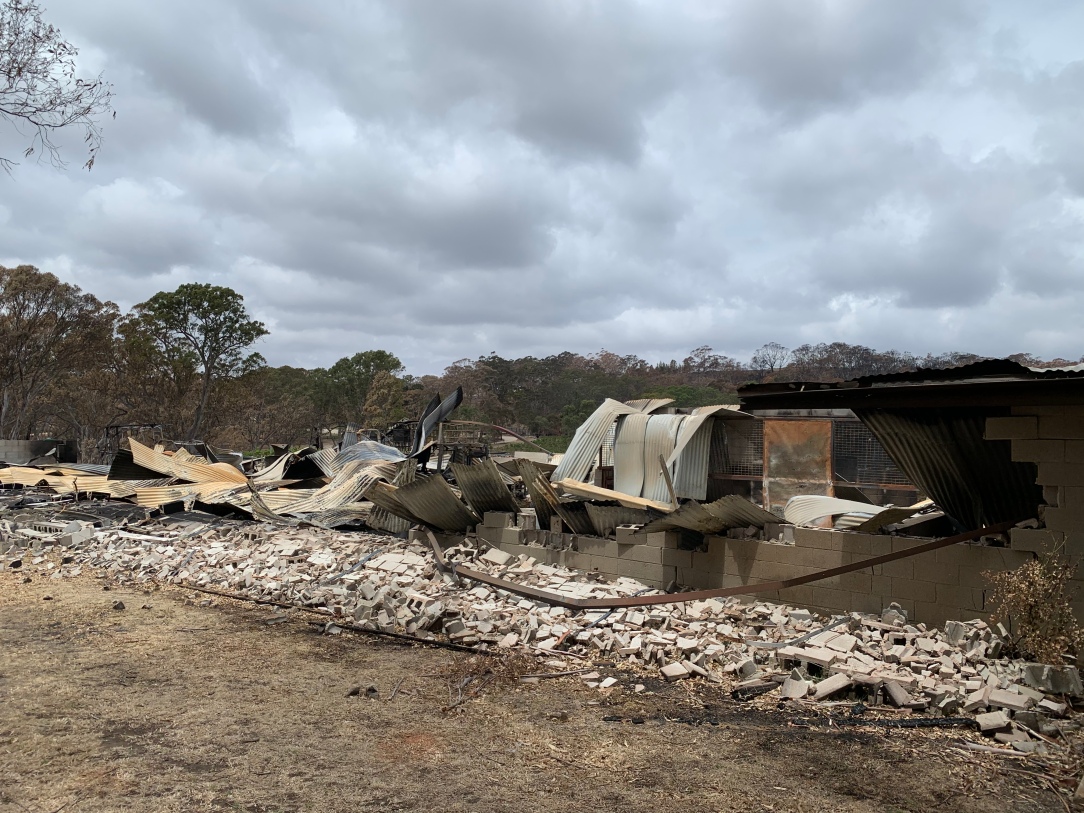 I’m pleased to say that each of these winery’s cellar doors was open for business, and indeed were bustling in an outpouring of support. In many ways our wine industry defines our state and the Hills, arguably the producer of the finest Sauvignon Blanc (sorry France, NZ, Chile), took a massive hit along with wildlife paradise Kangaroo Island. 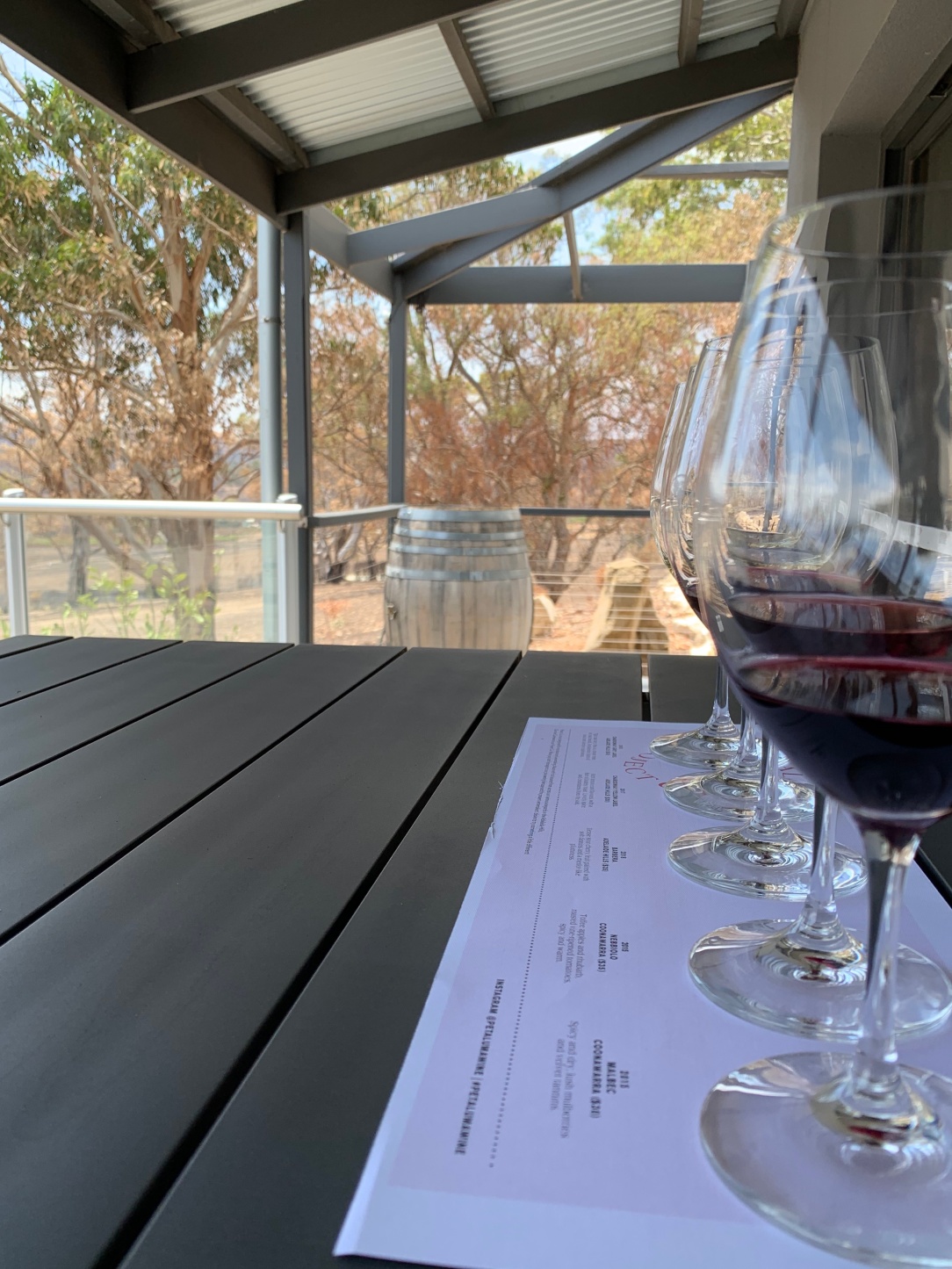 The town of Woodside had it particularly bad but was ready to greet the Tour enthusiastically with displays of bunting and bike-themed artwork installations. The cyclists themselves would see the effect of the fires at first hand as they raced past on one of the Tour’s stages. Cyling enthusiasts watching remotely on television would also see the devasation alongside South Australia’s natural beauty.

As the Tour’s preliminary event began, a city-centre circuit, the first rains fell – treacherous for cycling but precious relief from the heat, flames and smoke, and for the suffering wildlife. Cooler weather followed for the week of the Tour, perfect for cycling. Crowds turned out en masse to support each of the stage starts and the associated street parties.

At Glenelg‘s street party, held on the evening before its stage start, large crowds revelled in a display of wrestling, milling around al fresco pop-up eateries and bars, enjoyed Brazilian carnival dancing, or were treated to a feast of live music including Latino-funk influenced Abraska or the southern-soul-rock of the inimitable Wanderers.

On race day Moseley Square and Jetty Road were crammed with spectators, young and old, lycra-ed and civilian-clothed, patiently waiting for a thirty second view of the passing peloton beginning its 80 km ride to Victor Harbor on the south coast. Bike parking was at a premium, even the tram track serving as short term bike storage, the esplanade transformed into a temporary cycling superhighway for the myriad amateur cyclists who emerge at this time of year.

Following the race start, the city’ s musical youth took centre stage literally in the Spin Cycle festival. The setting was idyllic- a warm, not too warm, summer’s day, gentle waves rolling onto the beach, the majestic Norfolk pines providing shade on the pristine lawn scatted with games and craft activities, and granny having the chance to rock out.

In a varied line up the kids strutted their stuff from alt–folk to rock, surf, punk, grunge, house, and electro. One of my favourites, also the youngest, was the Vicious Pandas (below)- their music has more bite than their look. With all these talented acts on the up, Adelaide continues to justify its UNESCO City of Music status. 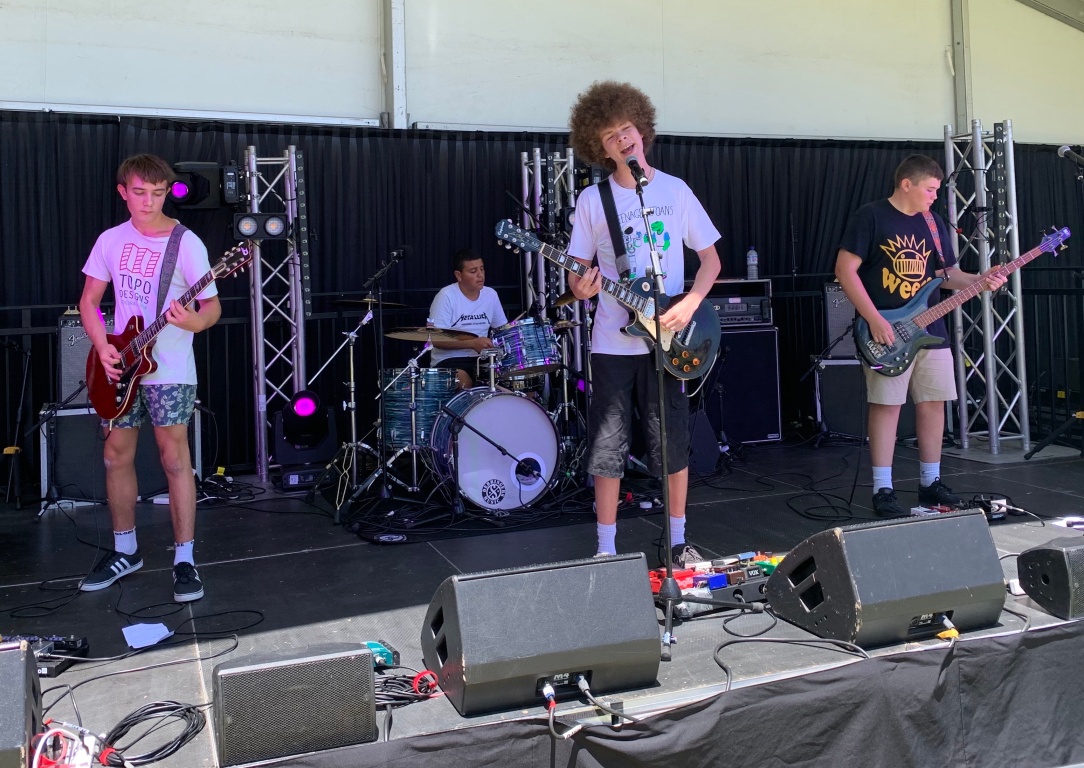 Let’s hope it’s the strains of music rather than the sirens of the emergency services that remains the defining sound of summer, but the 2020 TDU will always be remembered as the bushfire year.

1 comments on “Bikes, bushfires and bands”