Who would have predicted how well pedal-power would fare against the might of formula one?

​
With the New Year firmly bedded in and the summer now high, it’s time for the annual cycle-thon that is the Tour Down Under (TDU). Originally conceived twenty years ago as a replacement for the Australian Grand Prix (now firmly ensconced at Albert Park, Melbourne) who would have predicted how well pedal-power would fare against the might of formula one? The Tour now attracts the world’s elite cyclists (formerly including the infamous Lance Armstrong) as a prelude the the cycling season around the globe.
Starting with the People’s Choice Classic, a circuit race around the city streets, the Tour

moves through six more stages featuring routes through some of the best scenery South Australia has to offer including the Adelaide Hills and McLaren Vale wine regions. With starts scheduled for select metropolitan suburbs, many of the local councils hold street parties ahead of their stage. Numerous side races for amateurs including the charity Undies Run, family events and the Tour Village in Victoria Square ensure that the whole state goes mad for two wheels for one week.

TOUR DOWN UNDER STAGES

Sunday January 14: People’s Classic–  Adelaide CBD and eastern Parklands. Two blocks away, I can almost feel the blast of wind as the peloton speeds by, so no excuse not to go!

Wednesday January 17: Stage 2 – Unley to Stirling  (148.6 km). From the inner south suburb of Unley, through the city to a circuit around the north of the Mount Lofty Ranges, including the picturesque German colonial town Hahndorf, ending in Stirling. 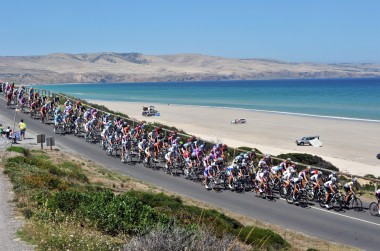 Saturday January 20: Stage 5 – McLaren Vale to Willunga (151.5 km). Through the vines of the region famous for its marine climate reds, including not once but twice up the gruelling 7.5% gradient Willunga Hill.

Sunday January 21: Stage 6 – Adelaide Street Circuit (90km). A final sprint from the Tour Village in Victoria Square up and down Adelaide’s main street, King William Street, and around the iconic Adelaide Oval.