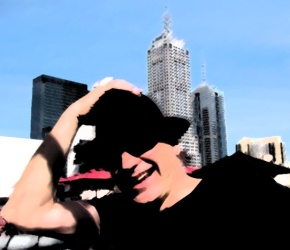 Doctor D is an alt blues-rock guitarist, songwriter based in Adelaide, occasionally performing with London band Sweet Thursday. He has performed at Buddy Guy’s Legends club and Blue Chicago in the Windy City, as well as in many London music venues and the 5th Hanwell Hootie. He was a winner in the SCALA Festival of Original Music in 2014 and 2020.

Previously he hosted Music Mondays at the Edinburgh Castle Hotel and Hutt Street Acoustic at the Havelock Hotel, Adelaide. He is a board member of SCALA. His current project is a show for the 2021 Adelaide Fringe SWT_HM_ADL in collaboration with Fergus Maximus.