Taking it to the streets

FACES IN THE CROWD

All through the night in downtown Auckland we had been serenaded by a constant chorus of Living on a prayer from the English pub next door.

The following day the GF asked, “What’s that red and white flag hanging out of that apartment window?”

During the day Queen Street and surroundings had been jammed full of families watching the Christmas Santa Parade, but now, in the evening, festivities appeared to be continuing, indeed intensifying. Taking to the streets we came across a group of flag wielding Tongans. What was it about? They explained that in the Rugby League World Cup semi-final the day before, Tonga had been denied a last minute winning try after an incredible seven minute comeback against England, and that, despite reasonable doubt, the match official had not consulted the video referee.

Pangs of guilt, having just obliviously consumed a roast dinner in a deserted English pub, we felt for the injustice. Queen Street was a sea of red and white, a horn-blaring cavalcade of flag-waving daredevils hanging out of, or standing on cars, as thousands of Tonga fans made their protest. Central Auckland was brought to a standstill. A solitary flag-waving figure stood in front of a bus, denying it passage like a Chinese pro-democracy demonstrator. 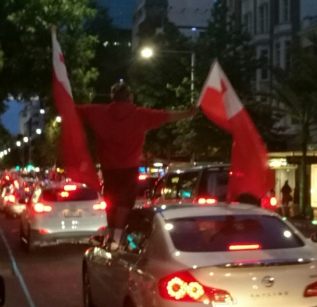 This must be what a revolution feels like. Placards and plaits everywhere, a cacophony of national pride and outrage, but despite the depth of feeling, it was peaceful, with a smiling Pacific joyfulness about it. Goodness knows what the public outpouring would have been had Tonga won.

for the weekly photo challenge A face in the crowd.

3 comments on “Taking it to the streets”