Given New Caledonia’s curious licensing laws – no sale of alcohol between midday and 9pm at the weekend (and also Wednesday) – and the constraints of an apartment-based long weekend, a trip to the supermarche was Saturday morning’s priority. Whilst walking up the road from Anse Vata to the local shops a bus came along heading for Noumea’s centre ville. So we hopped on. Why not? Better supermarkets and a sense of adventure.

We alighted at the charming Place des Cocotiers and started our search.
“There!” I yelled triumphantly, showing my superior knowledge of French culture, “Darty.”

“It’s an electrical store,” the GF replied. The search continued, till at last we found one.

“Let’s have a coffee before we go in. We’ve plenty of time.”

Coffee consumed, we entered the supermarche, vast and stocked to the rafters with French brands and produce. Plenty of time to look round and admire les fromages et charcuterie.

We found the wine section at the back of the building, but it was roped off! It was before the curfew, but an imposing red-lettered sign read ‘closed for maintenance.’

Disaster, and no option but to head back to the square to ask at Tourist Information. Unfortunately, a cruise ship had just docked, and the place was full of bemused cruisers wondering how on earth they had landed in France in the South Pacific. I got the directions and with five minutes left to buy booze, it was with a haste that was neither elegant nor insouciant that we found the supermarket. 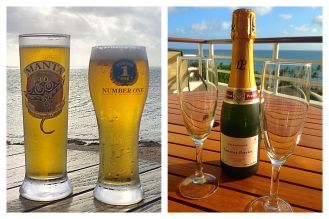 The wine section was almost entirely French with a few shelves offering wines from Les Pays Etrangers, meaning mainly from Jacob’s Creek. Sommelier duties accomplished (plus some Manta beer), this was not the final hurdle – the checkout line was snaking through the whole store. It seems everyone on the island was doing their weekly shop, or lining up just to buy ready-made pizza or ice-cream. Fortunately I had enough South Pacific Francs (XPF) and sufficiently few bouteilles de vin that I qualified for the quick cash only queue – and made it to the front just on the stroke of noon. Haut drama.

The haut cuisine followed later that evening. After a well earned aperitif and sunset cocktail at Le Roof overlooking the Baie d’ Anse Vata, and a balmy stroll though the palms and car parks of Le Meridien Hotel, we arrived at L’Hippocampe (the sea horse). Maitre d’ Thiery fussed over us in a suitably Gallic fashion, serving us prawn and mushroom ravioli, salmon gravlax, scallops, filet de bouef, all  garnished and embellished with an assortment of foams, emulsions, confits and mousses.

With all its produce shipped over from France, New Caledonia is expensive, and L’Hippocampe eye-wateringly so. However it was a wonderful experience of fine French dining and, as the bill was in XPF, there were no further dramas as I couldn’t work out what it had cost anyway.

See also New Caledonia:France is closer than you think.