I’ve always attributed my antipathy to cricket as being down to my Scottish nationality rather than, say, to my inability to bowl straight, score any runs, or throw or catch a ball. I can still hear the schoolyard cries of derision following the dropping of the easiest of catches, or being out for a “duck”. So I have never played or watched cricket since.

Living in Australia, that was due to change…

At the start of the final day of the second Test Match of The Ashes series between Australia and England the result hung in the balance. The Adelaide Oval is only a short (free) bus ride away, and with the sun shining, with time on my hands, now was the time to end my cricket boycott. Moreover, entry to the world’s most beautiful cricket ground was by “gold coin donation” so I had no excuse not to go and experience the age old rivalry, the atmosphere, the drama, and the antics of England’s Barmy Army supporters.

Eagerly I left the house to catch the free bus to the Oval, all the while checking the score on my phone. England were still four wickets from defeat (or draw or victory). Such a strange sport – rain can halt a match, resulting in a draw, rendering a commanding lead useless – but the sun was shining today, as it does most days in South Australia. 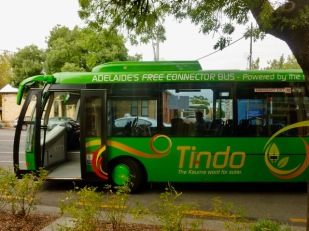 As the sun was shining the bus company deployed Tindo, the world’s first solar-powered bus, instead of a normal bus. We rode with sun beating down and the clock ticking down. Wicket after wicket fell as we edged closer, to finally arrive at the Oval just as the last wicket fell to give the Aussies victory by 120 runs. My Ashes experience lay in ashes. Maybe I’ll stick to football.