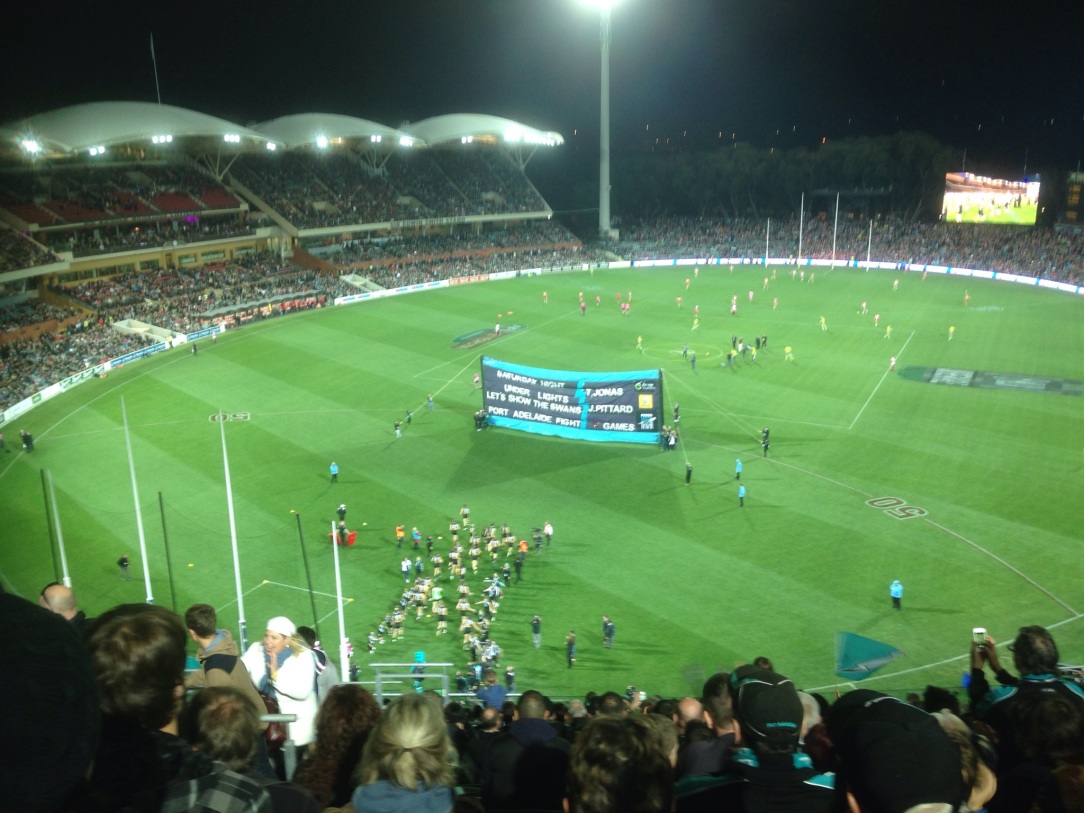 Inside the stadium we were whisked skywards on the escalator, up and up to nosebleed territory. The good organisation and forward-planning of the venue yielded us two beers and hot chips (you have to say “hot” here or else you end up with crisps) with maximum efficiency and minimal hassle. Best of all, the consumption of alcohol was permitted from our seats.

We had been discussing the start of the game. Is it “bounce off?” Or “bounce down?”

“It’s just called the bounce,” a lady from the row in front informed us.

Prior to the bounce (off!), we were encouraged by Port’s mascot Tommy Thunda and sang the Port song, the Power to Win, as the teams emerged to run through large banners. I asked K’s sister, who is an expert on AFL, how many players the teams had.

What was clear was that there were lots of referees and line officials. One of the curiosities is the backwards throw the line officials do to restart play after the ball has gone out (for a throw-in).

The game was fast and exciting and fairly easy to understand: a goal, scored by kicking the oval ball between the centre posts, is six points; one point if it’s between the outer posts or hits an inner post.

“That should be worth ten,” we said as Port repeatedly hit the post.

Almost anything goes when it comes to tackling, except that you are not allowed to push a man from behind (unless you are a Swan).

“Oh no, it’s Howard Webb refereeing,” we complained when a blatant infringement, that even the perpetrator felt guilty about, resulted in a Sydney goal.

The Swans, many people’s favourites to be champions, were clearly bigger, stronger, faster and better at kicking and catching than Power. Nevertheless, had Power not squandered many of their chances, the game would have been a lot closer. On one occasion a misplaced Power pass led to a Sydney interception with no one between the player and the goal. Duly dispatched.

“Offside!” We yelled, but there is no offside rule. There was goal-line technology though, used to adjudicate… another Sydney goal. I wondered when Power would turn up the power. Third quarter? No. Fourth quarter? More Sydney goals, a few for Port, then a final flourish. For Sydney.

The siren sounded and the game was over. We filed outside, everyone checking their phones to see where we were on the ladder (they don’t call it the table). We made our way to the special free bus, stopping to chat to friends (you always meet people you know in Adelaide). The journey home was even less rowdy than the journey out- we didn’t have the bingo-playing grannies this time. It’s a shame my first Port Adelaide game didn’t yield a win, but I wasn’t overly disappointed. At least it wasn’t proper football. Then I would have been devo!

2 comments on “Footy (AFL) at the Adelaide Oval Part Two”