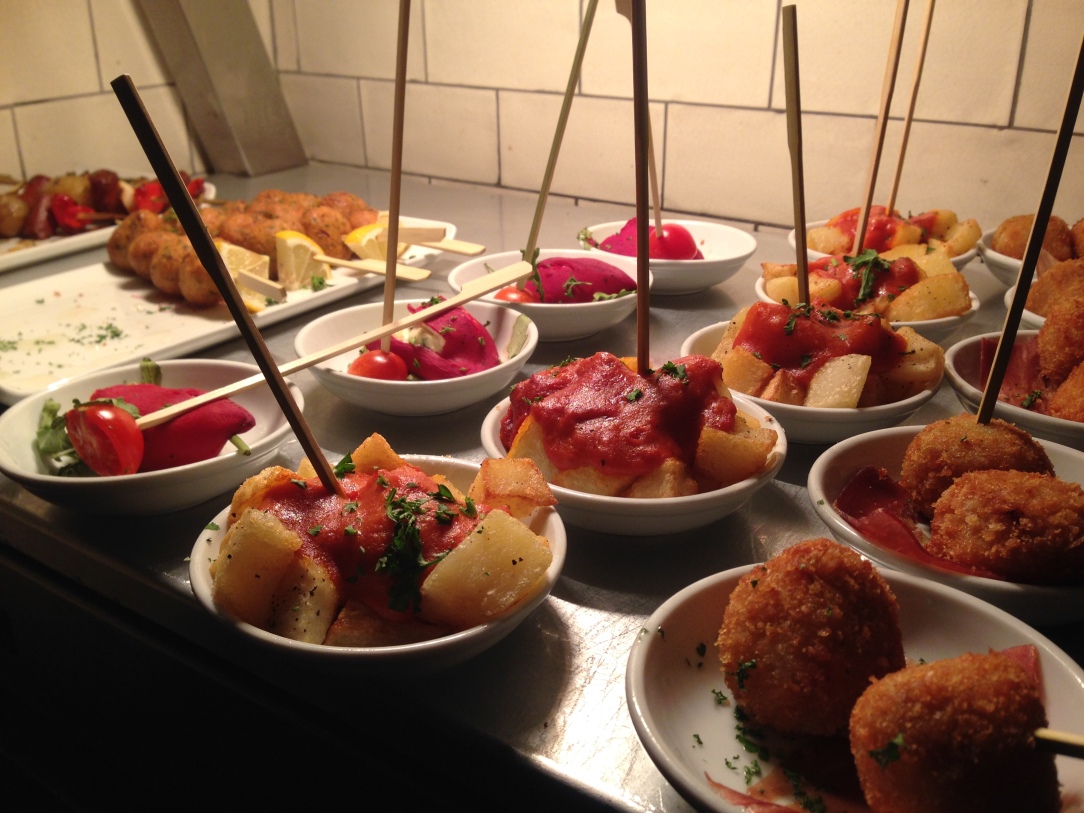 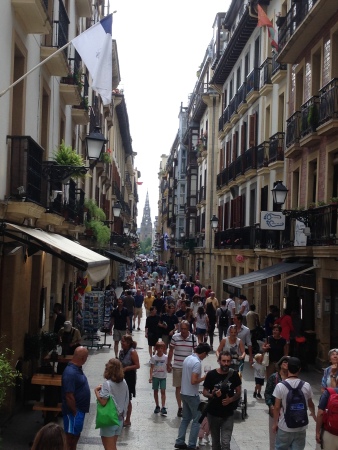 San Sebastian or Donostia, in the Basque Country of northern Spain is foodie heaven. Boasting more Michelin stars per capita than any other place on the planet, you are never more than a few steps away from world class cuisine, either in conventional restaurants or in the informal pintxos bars that abound in the Old Town. Pintxos (pronounced “pinch-oss”), the Basque take on tapas, is found on every bar top in the city and even in the bus station. Choose a bar, name your drink – either local dry cider poured from a great height to produce fizz, or the equally high altitude dispensed white wine Txakoli (“cha-co-lee”) – and then face the challenge of which of the enticing, exotic works of culinary art piled high on the bar you are going to eat first. Fresh seafood, salted fish and cured meats (jambon and chorizo), roasted vegetables, cheeses and tortillas (Spanish omelettes) of many flavours dominate the bar tops.

The messier it looks, the better the pintxos

You could virtually spend a lifetime sampling all the various combinations of ingredients, the different takes on classic pintxos and those that are unique to one bar. To ensure we didn’t miss out on some of the best pintxos, we opted for a tour. Starting at the Michelin-listed A Fuego Negro (the Black Fire) in the Old Town, our guide took us across the River Urumea to the New Town to places more frequented by the locals, and which we would never have found. This curated tour introduced us to six of the best pintxos, three of them hot and freshly prepared, plus three drinks: a cider – which we had a chance to pour from height ourselves, a Rioja from the Basque Navarro region and, of course, txakoli. A useful tip from our guide on how to select a pintxos bar is to look for the number of discarded paper towels or cocktails sticks on the floor (you can’t place them back on the bar)- the messier it looks, the better the pintxos. 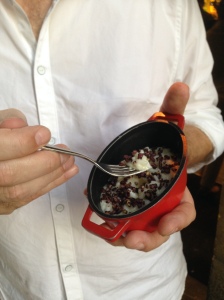 An alternative introduction to Basque food and culture was to be had at the tasting room of the San Sebastian Food Cookery School. Located in the basement of the super impressive Maria Cristina Hotel, the School offers classes and tastings. Our food and wine tasting session lasted two hours and was accompanied by detailed tasting notes and Powerpoint presentation. Somehow a cider, three whites and three reds on the menu grew to eleven generously poured tastings, and the matching plate of sardines, anchovy, beans in truffle oil, and chorizo also expanded, the chef popping in with a king prawn or two, or a plate of cheese, to make this one of my all time favourite epicurean experiences. 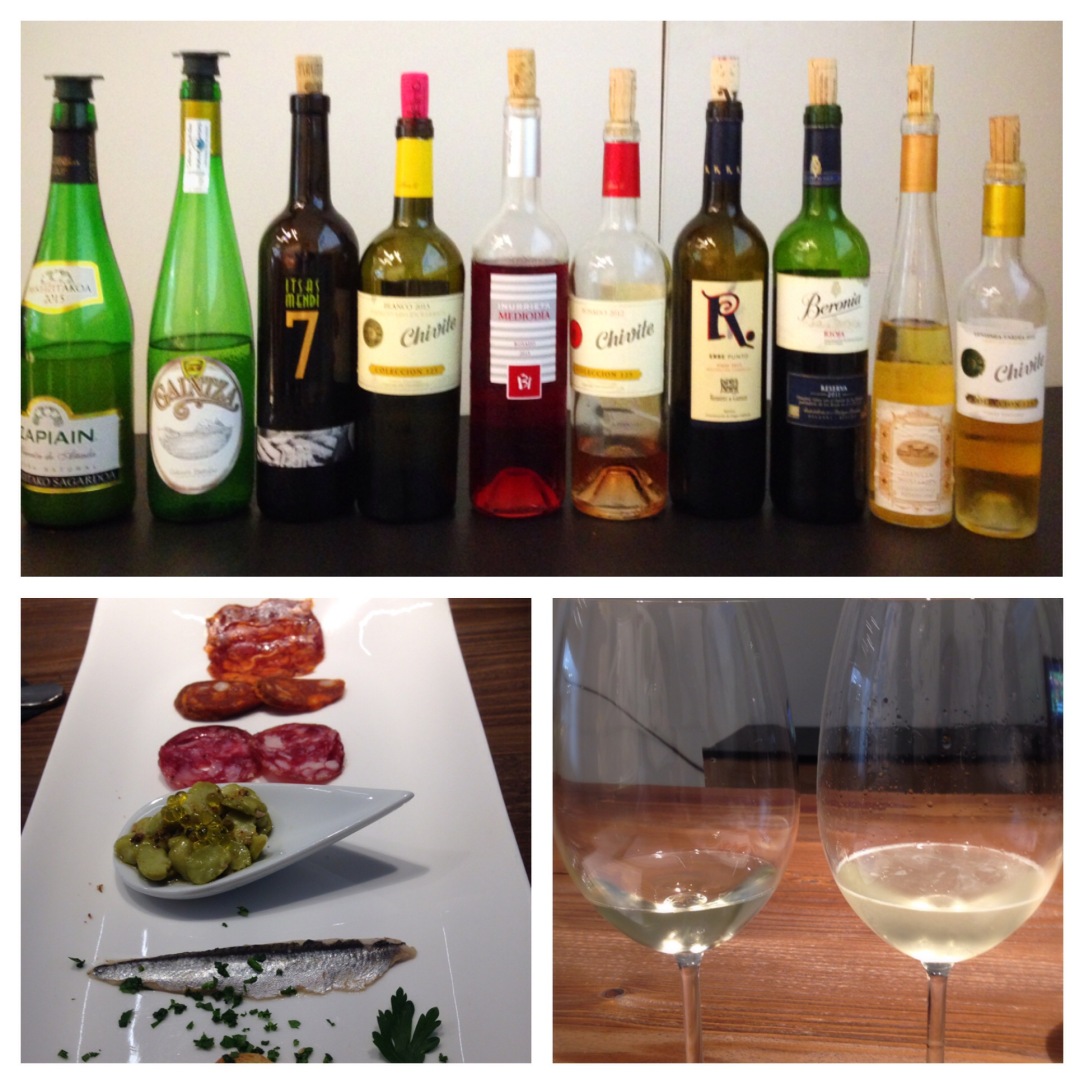 Back on the pintxos tour, we were privileged to get a glimpse of the third arm of Donostia’s food culture- the Txoko, a private gastronomic club where usually the men will cook for each other (and drink, of course). The clubs are easy to spot- a blue sign and looking like a deserted bar or restaurant.

With its deep-rooted culture, its gastronomy, beaches and relaxed ambience San Sebastian has to be one of Europe’s top destinations, and one of my favourites. If you can’t get to Donostia, try Pix pintxos bar in Ganton Steet in London’s Soho for an authentic Basque experience.

3 comments on “Don’t pinch my pintxos”