“It’s amazing what a lesbian with an umbrella can do,” the brightly dressed middle aged woman joked. 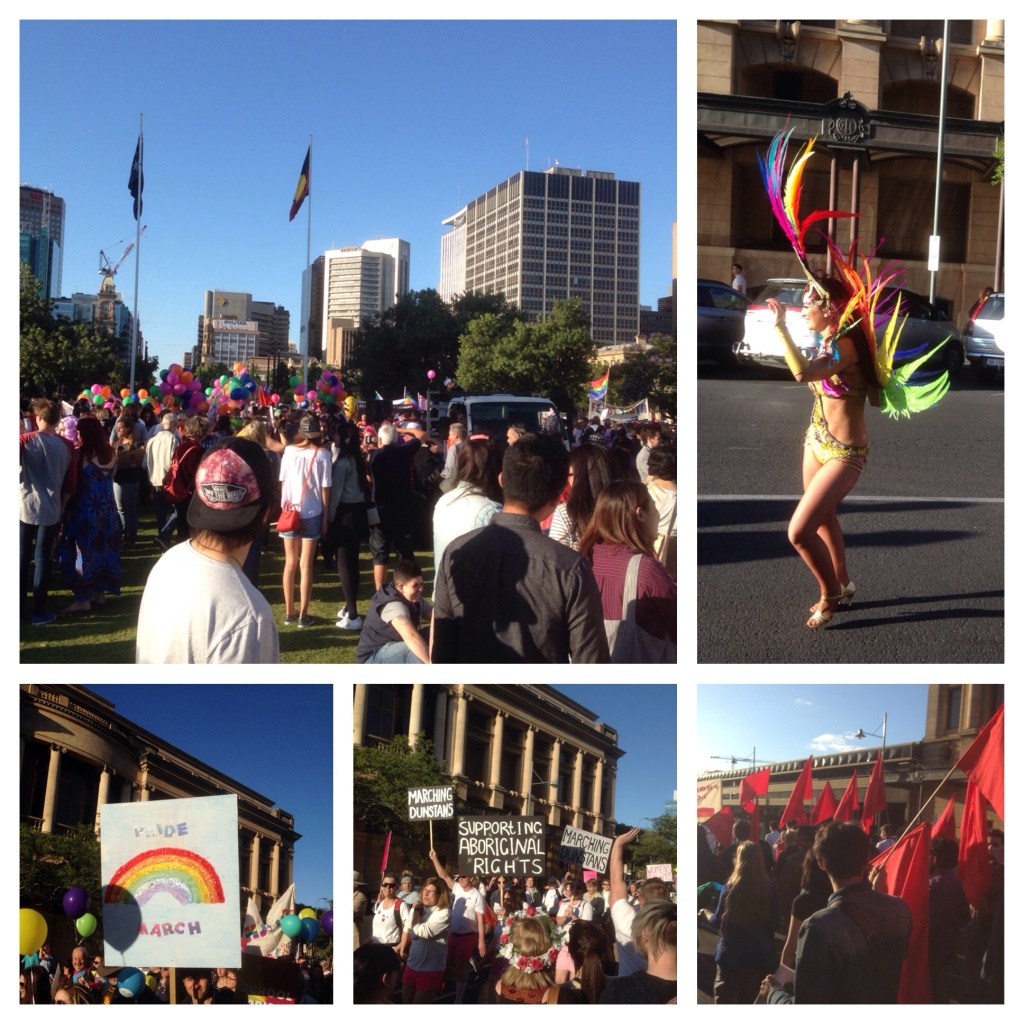 We had somehow, by chance, found ourselves at an outside bar near Victoria Square, just before the start of the Feast Parade, Adelaide’s Gay Pride festival. Whilst a colourful group of people were congregating in the square, a colourless few were loitering on the corner. These were religious protesters, about four in number, holding clumsily written placards declaring God’s endless hatred of gays.

The woman was in charge of a little girl. The girl asked, “Why does God hate gay people?”

“God doesn’t hate gay people, he loves everyone,” the woman replied, then corrected herself. “No, that’s not right. God’s made up.”

Just as the procession was about to start, the woman leapt into action again, waving her rainbow umbrella at a taxi that was blocking the route of the march. She prevailed and the taxi moved off, to cheers of the onlookers in the bar, as the woman took a bow.

The procession came by, first the police car in escort – seemingly trying to run over or at least intimidate the protestors, then the weird placard-bearing killjoys themselves, finally with a burst of Brazilian drumming and samba dancing, the gay, lesbian and transgender community of Adelaide, including for the first time, policemen and women participating in uniform. Everyone seemed happy and excited.

It seemed a good idea to follow the march to its end, a street party in the West End university precinct. So we jumped on the tram and met the procession at its conclusion. We had no real intention to attend the street party, just to sample some of the energy and atmosphere at the nearby World’s End Hotel (i.e. pub).

Finding a seat on the end of a table, we fell into conversation with some of the marchers, a very affable young man who insisted on calling the GF ‘Daisy’. When apprised of her actual name, he replied, “No, Daisy’s better.” So Daisy she was for the night. Our other new friend was a tall, very athletic, straight talking (but that was the only straight thing about her) female miner on a few days leave. “You can come with us, but you’d better keep up,” she said.

So we went to the Feast street party with our new friends. The festival was formally opened by one-time Eurovision winner and cross-dresser Conchita. Later, waiting in line for the toilets, a girl said to us with incredulity, “Are you together, as a couple? Why are you here?”

“Good answer,” was her response.

It was a victory for the gay, lesbian and transgender community.

1 comments on “Feast and footwork”