FRINGE REVIEW- The element in the room

The element in the room: a radioactive musical comedy about the death and life of Marie Curie. 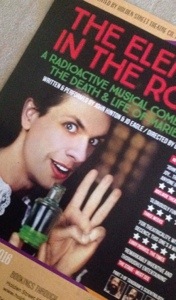 By John Hinton and Jo Eagle.

So what exactly is a peer-reviewed musical comedy? Precisely what it says- a theatre show with songs and jokes about science which have been verified by a review panel of real scientists. John Hinton plays the celebrated Polish double Nobel Prize winning scientist – and, with hilarious comic timing and physicality, almost all the other parts including a trio of Greek philosophers, English chemist John Dalton, Marie’s erstwhile American journalist-tormentor and friend Missy Meloney, her own daughters Irene and Eve- with Jo Eagle playing husband Pierre and accordion.

What exactly is a peer-reviewed musical comedy?

Part documentary, part theatre, part gameshow, we are drawn into Marie’s life and science with the aid of a human periodic table and a ball of green wool to explain the radioactive decay chain. Cleverly paced and meticulously researched, the show is a fitting tribute to the Curie’s discoveries, the painstaking extraction of radium from pitchblende, the sheer graft of science, and more personally, Marie’s struggles with fame, and issues of science, commercialism and feminism. There is also an extremely catchy song about radium.

At a time when South Australia is contemplating its nuclear future, the show seems particularly apt: entertaining, myth-busting and informative.

The Element in the Room is part of Tangram Theatre Company’s ‘scientrilogy’ of productions, the others featuring Charles Darwin and Einstein. Find out more at

Ticket and performance details from:

4 comments on “FRINGE REVIEW- The element in the room”