INDIGO’S PIANOLYMPICS – CHOIR OF MAN – DAVE AND MIKE DO CASH AND DYLAN – LORD OF THE STRINGS! RETURNS

With a whole month of the Adelaide Fringe Festival, there are going to be heaps of reviews appearing here. 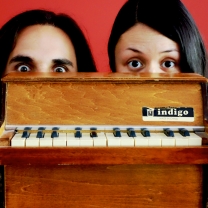 My first experience of this year’s Fringe was Indigo’s Pianolympics at The Jade, a beautiful venue just a short walk from home. Two classically trained concert pianists presented a mildly amusing take on international music competitions. A working knowledge of popular classical composers would have been useful for understanding some of the musical in-jokes. Fart gags and a modicum of predictable nationality stereotyping somewhat detracted from the excellent musical ability of the performers. For me the highlight was when they actually played real pieces and for the joke/lifestyle advice:

When I grow up I want to be a musician.

Taking it up a notch as a spectacle, the Choir of Man at Gluttony (the venue now hugely expanded) recreated the inside and the feel of an old fashioned pub, as a group of mates fought, frolicked, joked and jostled their way through their everyday lives in a very bloke-ish way. With a real bar on stage, replete with taps, a barman and real beer (and even a Pina Colada for one lucky punter), members of the audience were drawn into the bar room antics and the lads’ narrative – literally. Multi-part vocal harmony, tap dancing, incidental instrumental playing, all round banter and audience participation made this a five star feel-good show, with standing ovations for the cast.

Mike and Dave do Cash and Dylan saw local musicians Michael O’Flahery and David Lane (a MusicMondays performer) take up their guitars, banjos and harmonica to revisit the stunning songwriting oeuvre of Johnny Cash and Bob Dylan. The Dylan stuff was entirely “old Dylan” with classics such as Mr Tambourine Man, Blowin’ in the Wind and Just Like a Woman to name but a few. A highlight was the quick fire multi-syllabic beat-inspired Subterranean Homesick Blues. On the Cash side I Walk the Line, Ring of Fire, and Folsom Prison Blues stood out. Another highlight was the sole Dylan-Cash collaboration Girl from the North Country. The choice of venue was inspired, the industrial interior of Mama Jambo providing a 1960’s Greenwich Village ambience to the show.

Lord of the Strings! Returns at the German Club (worthy of a blog post on its own) featured solo guitarist Matthew Fagan. With a host of stellar names as former collaborators and

teachers, Fagan promised much. Opening with an extended heavy rock shred-fest, claimed to be “therapeutic,” I was initially questioning of his virtuosity. However my skepticism was banished as soon as he took up his unique ten-string guitar to perform a mash up from Greensleeves to Led Zeppelin. The second half of the show consisted of the “guitar challenge” where the audience is invited to name any guitar tune and Fagan will play it. Being Adelaide, the Fringe, and with an older audience, tonight’s challenge ranged from Bach to The Beatles, all of which Fagan achieved in a seamless, seemingly effortless improvisation that combined rock, folk, classical and flamenco techniques. He is indeed the Lord of the Strings.